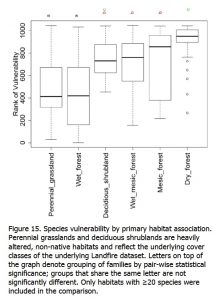 “Species primarily associated with dry forests have higher vulnerability scores than species from any other habitat type.” 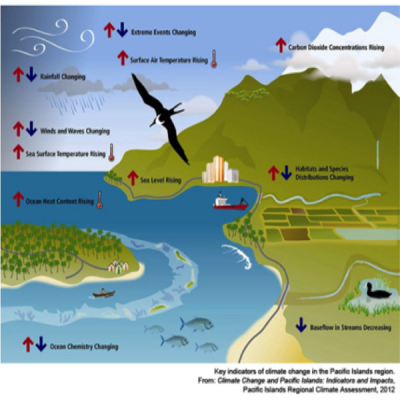 Hawaii has and will be impacted by many adversary affects from climate change, unless the level of carbon dioxide and other heat trapping gases such as methane in earth’s atmosphere are lowered.

Sea level rise, coastal flooding, extreme weather events such as an increase in frequency and intensity of hurricanes, extreme heat and extreme rainfall, as well as more wildfires, erosion, desertification and disease are some of the other impacts facing Hawaii as a result of climate change.

This look into the potential future climates facing the island are critical for land managers in planning restoration priorities and activities.  For more information on this analysis, resulting impacts on a major dry forest area and management strategy considerations, please refer to the following fact sheet:

The Future Climate of Pu’u Wa’awa’a

Given the forecasts for increasing drought in many dry forest areas, there are actions that can be taken to address drought impacts.  For information on what management activities land managers can do before, during and after drought, please refer to the following fact sheet:

We can all help to combat climate change by rebuilding our tropical dry forests.

Forests combat climate change by absorbing carbon dioxide from the atmosphere and sequestering (storing) the carbon in its biomass both above and below ground, while releasing the oxygen for us to breathe. Forests help capture and direct rainfall to replenish fresh water aquifers, mitigate erosion by reducing rainfall runoff and winds, and provide shade and cooling to combat increasing temperatures.  They also help to protect native species by virtue of providing the healthy habitats needed by these species to survive. 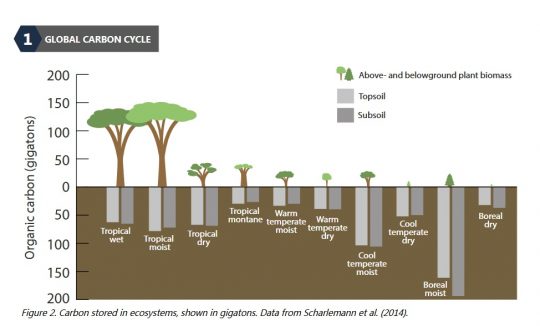 Tropical forests, due to their continual growth throughout the year, contribute tremendously to carbon storage. The amount of carbon sequestration by dry forests is not trivial, as shown by this graph.  While the above ground plant biomass is about a third of the biomass stored in tropical wet and moist forests, the below ground biomass is relatively similar for these three tropical ecosystems.  And this is with just 10% of the dry forest ecosystem left on the planet.  The potential for carbon storage from dry forest restoration is huge.

Project Drawdown is a major collaborative effort by researchers, policy makers, business leaders and activists to assemble and present the best available information on solutions to climate change. Restoring Tropical Forests is the fifth highest ranked solution to help mitigate climate change as described at their website:  Solutions: Tropical Forests.