Lesson 1: What is a Dry Forest?

The entire Nāhelehele website is devoted to answering the question—”What is a dry forest?”.  This lesson will provide some important highlights to better answer this question.

What is a dry forest?

Dry forests are most defined by their low amount of rain, and many by a “pulse rain system” which means no predictable rainy season, and rain that may come in unexpected small or large bursts at any month. Lesson 5 provides more information on pulse rain systems with a rain chart sample from Ka`ūpūlehu that shows this by its color-coded months.  Most of the remaining dry forests are located on Hawaii’s dry, leeward coasts to mid-level elevation where rainfall is far less.  However, dry forests are uniquely diverse and on Hawai’i Island, are also found at high elevations such as the palila bird habitat and māmane forests of Mauna Kea. Dry forests are also found to the South in Puna and Ka`u; and they are found on other islands as well as world-wide.

What grows and lives in the dryland forest?

More than 100 native plant species grow in dryland forests, including the endangered Kauila, Uhiuhi, Koki‘o (Hau hele ʻula), ‘Aiea and Hala pepe trees.  The official Hawai’i state flower, the Ma`o hau hele is an endangered native hibiscus of dryland habitats. In addition, more than 25 percent of Hawaii’s endangered plant species are found in dry forests. Birds, such as ‘Amakihi and the rare Palila (an endangered Hawaiian honeycreeper) are also found in dry woodlands.  Other birds, such as the ‘Alala, recently existed only in captivity, and conservationists just recently released these birds back into native forests best suited for their survival, health and proliferation. The rare and endangered `O`kai, or Blackburn-sphinx moth also makes its home in this habitat.

A mix of plants and ground covers

A healthy native forest does not look like a manicured park. There will be a mix of ground cover, shrubs and trees that vary in height. Ground cover changes in response to the seasons and rainfall. Sometimes it will be covered with native vines as in the picture below—most are Anunu and ʻĀwikiwiki. And then a few months later the vines will have naturally died back, and the forest will look bare. Restoration sites like Kaʻūpūlehu, encourage the growth of native ground cover that includes vines. However, many non-native species need to be weeded out, since if left alone they take over the forest, out compete for resources, and crowd out the natives. 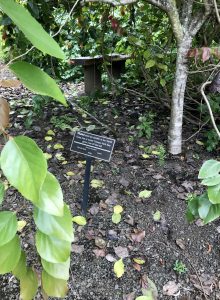 Adapting to weather and deciduous or semi-deciduous trees.

Plants in a dry forest adapt or adjust to changes in weather, sometimes in dramatic ways. There are some dry forest trees and shrubs that will drop many, if not all of their leaves, either seasonally or during times of no rainfall.

Some examples of these plants include: Ohe makai, Wiliwili, young Hala pepe or Iliahi, Akia, Ilie`e, and some Maua individuals. So don’t think a tree in the dry forest is dead just because there are no leaves—it might be very much alive and just conserving energy and water. The word for trees that drop their leaves seasonally is deciduous, such as the native maua tree shown to the left, that drops its leaves every summer regardless of weather.

Dry forest trees that drop their leaves often do this on purpose during periods of high temperatures and no rain, such as during the summer months. This is an ingenious coping mechanism that some dry forest plants adopted over many years to help them survive in these dry lands, and part of what makes them unique. 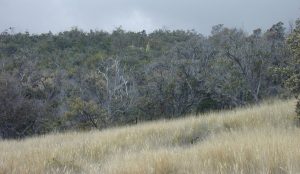 How much native dry forest has disappeared?

It is nearly impossible to grasp how much native dry forest has died. Today there are no large intact dry forests that run for miles and miles and miles as they did even 100 years ago. Today, there are only patches and remnants here and there. Ecologists say less than 10% is left—some even say only 5%. Either way means a swift and tragic loss of many native species. Look at the Dry Forest Range map below, and in particular the colors which show how much of the dry forest has disappeared. The various shades of yellow represent the historic range of native dryland plants, and non-native species are represented by bright pink. Research and discoveries in some lowland and coastal areas have found that dryland species once grew in places they no longer exist. There is still much to be learned about dry forests, the things that live and grow there, and ancient relationships.