The purpose of this award is to recognize outstanding contributions towards the restoration and perpetuation of Hawaii’s dry forests.  To date, two individuals have received this award. Descriptions of their exceptional dry forest efforts follows:

Honoring Beverley Brand in recognition of her perseverance safeguarding the Waikoloa Dry Forest Preserve for present and future generations. 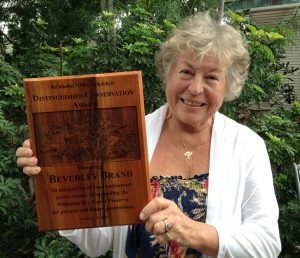 The following was read at the February 27, 2015 Dryland Forest Symposium upon presenting the first “Distinguished Conservation Award” from the Board of Ka‘ahahui ‘o Ka Nāhelehele to Beverley Brand.

Many people in this room work hard for dry forest conservation.  We do research, plant trees, pull weeds, build fences, raise money, and teach others about the forest. It’s hard work and it requires a lot of our time and energy.  Our reward is seeing plants grow and small patches of dry forest take hold in places they haven’t been in a very long time.

This year Nāhelehele is establishing a Distinguished Conservation Award to recognize a person who has shown extraordinary determination and commitment to protecting the dry forest.  The first recipient of this award is Beverley Brand, whom you just heard speak.  Bev has dedicated much of her life over the last 10 years to ensuring the future of a remnant dry forest in Waikoloa.  Her passion for saving the uhiuhi and wiliwili trees that grow there has not only created a future for that piece of forest, but has exposed a whole new generation of our keiki to the magic of the forest.

Beverley first walked out to what would become the Waikoloa Dry Forest Preserve in 2004. The land wasn’t protected, there was no intent to protect it by the landowner, no plan and no money. So Beverley took it upon herself to make a plan, find the money and connect with the people who could help her keep these special dry forest trees in Waikoloa from disappearing. Beverley talked to everyone who would listen about the dry forest in Waikoloa. She dreamt up a preserve, a restoration project and forest education programs for our community’s adults and children. She met with biologists, non-profits, conservation advocates, lawyers, funders, state and federal agencies, and more. She gained the support of the Outdoor Circle who would act as the umbrella for the Waikoloa Dry Forest Recovery Project for the early years. Bev started raising funds for the Waikoloa project through the Outdoor Circle, and more than once paid for critical project needs out of her own pocket.

In 2007 the project was accepted into the NRCS Wildlife Habitat Incentives program which would help to pay for the important early steps in creating a forest preserve.  Also in 2007 Bev and the Outdoor Circle were able to obtain a lease from the landowner (Waikoloa Village Association).  This lease was critical for obtaining grants and long term funding. By 2009 Bev had connected with Dave Faucette who wrote a management plan that was accepted by the State Forest Stewardship Program, another important source of funding.  Bev wrote grants, coordinated work days and rallied support for the project.  She connected with a school teacher and in 2010 her dream of having a children’s program based in the forest came true with the first year of the Waikoloa Future Foresters Program.

The project had grown enough by then that Bev decided to start a new non-profit to manage it, and by 2011 the Waikoloa Dry Forest Initiative was formed. The perimeter fence was completed that year as well.  Beverley sits on the WDFI Board as President and continues to be a guiding force of the project. She is the first to tell you that she didn’t do any of this by herself but if it weren’t for Bev’s passion, enthusiasm and stubborn determination there would not be a dry forest preserve in Waikoloa today.

Honoring Art Medeiros in recognition for his passion, vision, and leadership in conserving and restoring Hawaii’s dryland forests, and for inspiring others. 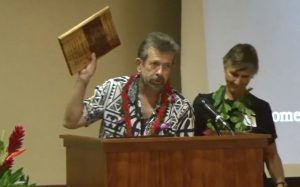 The following was read at the February 26, 2016 Dryland Forest Symposium upon presenting the second “Distinguished Conservation Award” from the Board of Ka‘ahahui ‘o Ka Nāhelehele to Art Medeiros.

In 2015, Nāhelehele established a Distinguished Conservation Award to recognize a person who has shown extraordinary determination and commitment to protecting the dry forest. The first recipient of this award was Beverley Brand for her work with the Waikoloa Dry Forest Preserve. This year Nāhelehele has chosen Dr. Art Medeiros – a man who has shown passion, vision and leadership in conserving and restoring Hawaii’s dryland forests and who has inspired so many others – as the 2016 recipient of its Distinguished Conservation Award.

Art started off his biologist career working at Haleakalā National Park. His first job there was a trail cutter in Kipahulu Valley as a volunteer. He spent so much time in Haleakalā Crater that he earned the rarely achieved status of ‘crater monkey’. Art was part of the Park’s Research staff at a momentous time in its history when the Park was fenced and feral goats and pigs were eliminated from the Park for the first time in nearly 200 years. When National Park and Fish & Wildlife Service scientists were moved into the US Geological Survey in 1996, Art followed. Those were the years when Art started the Auwahi forest restoration project with `Ulupalakua Ranch and when he worked with the Department of Hawaiian Home Lands, the USFWS, County of Maui, and others to save what was considered the richest tract of wiliwili forest left anywhere in the State at Pu`u-o-kali above Kihei. During those years, Art helped to co-found and develop the Leeward Haleakalā Watershed Restoration Partnership intended to restore the brilliant but shattered forests of leeward Haleakalā.

Art identified the need, collected the native seed, and gathered the forces to heed the call for last-minute, hang-on-by-a-fingernail restoration of Maui’s formerly great dryland forest. He identified Auwahi as a “museum forest” with elderly trees that lived without hope—without an understory, a younger generation, a tomorrow. He convinced the Erdman family, whose ‘Ulupalakua Ranch encompasses Auwahi, to participate in an experiment. Together they constructed a ten-acre “exclosure”—a rectangular fenced area that excluded cattle, goats, deer, and pigs. They destroyed the kikuyu grass. Those steps alone would maybe have allowed a natural system to restore itself. But not at Auwahi. The original trees were too scattered and geriatric. So Art asked for volunteer planters and began reversing two centuries of environmental collapse. Now, many years later, Auwahi is visible on Google Earth—a rectangle of exuberant foliage against an otherwise bitten-to-nothing rock scape. A grove of reclaimed forest.

When Art began the Auwahi project, he was told repeatedly that he was crazy for trying an impossibly risky project at this scale. But, as his kumu once told him ‘more bettah we try something, we already know what happens when we try nothing.’  And so today, those of us involved in dryland forest conservation would like to say thanks to Art for trying something instead of nothing!