“In 1994, the federal Office of Technology Assessment declared Hawaii’s alien pest species problem the worst in the nation…”

The degradation and loss of 90% to 95% of native dryland ecosystems is staggering. Factors that have brought about these changes continue to be threats to what little dry forest remains. Human behavior and the way we think about our native life can greatly impact the future and whether generations to come will be able to experience native dryland communities. 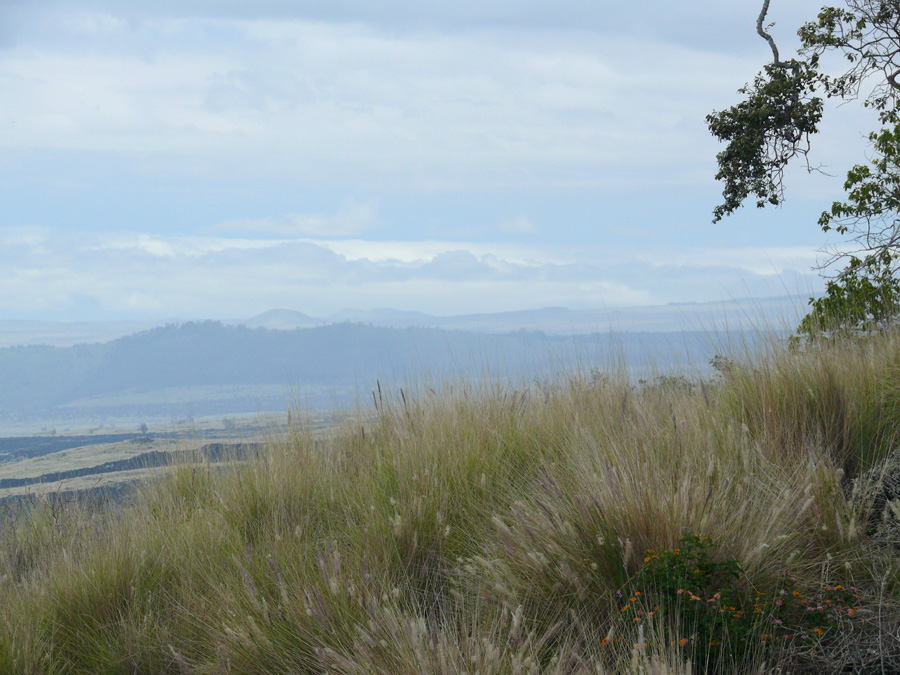 Invasive Fountain grass dominates Hawaii’s landscapes, where once there was dry forest 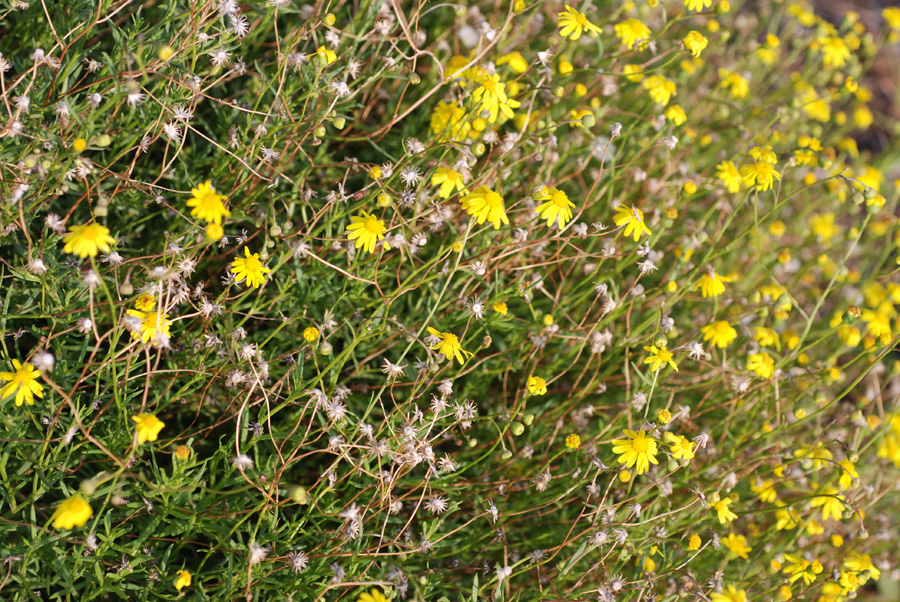 Invasive species are involved in many of the drivers causing the loss of native dry forest ecosystems: 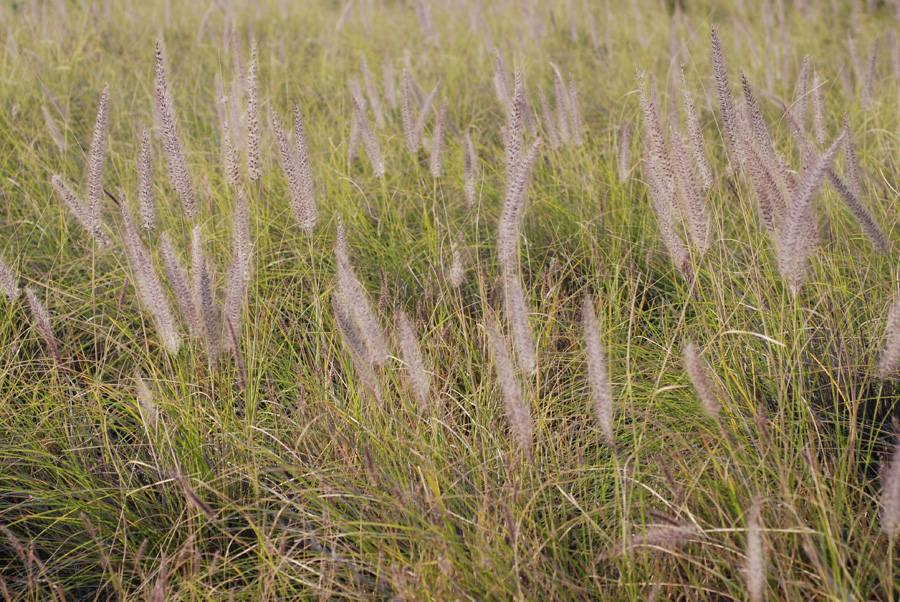 The greatest invasive plant threat to the dry forests in West Hawaii is fountain grass, which was introduced at a ranch in the North Kona area as an ornamental close to 100 years ago. It now covers over two hundred thousand acres in the Kona and Kohala region of Hawaii Island and continues to spread at an alarming rate.

It is a highly fire-prone plant which is also fire adapted, meaning it survives and spreads even more by wildfire.  Thus it not only is a major contributor to the spread of wildfires impacting native forests, it also out competes and prevents the regrowth of native species after fires.  It is this grass-fire cycle which has contributed to the vast savannas of fountain grass in West Hawaii. You can learn more about this highly invasive grass at the following websites:

In 2014 another major invasive threat to all forests throughout Hawaii was identified:  a fungus called Ceratocystis, which causes Rapid ʻŌhiʻa Death. ʻŌhiʻa trees are the foundational and most abundant tree (~ 80%) of Hawaiian native forests, so loss of this key species is of utmost concern across the State of Hawai’i. The fungus is a wound pathogen, i.e. it enters ʻōhiʻa through wounds in the tree. The fungus colonizes the sapwood of an infected ʻōhiʻa tree, and virtually robs the tree of the water and nutrients it needs to survive.

The following video provides more information on this major threat and what you can do to help prevent its spread:

Visit the following website for the latest information on Rapid ʻŌhiʻa Death, including research findings and maps showing where it is located:  rapidohiadeath.org

If you would like to help with conservation efforts for ʻōhiʻa, please visit the Ōhiʻa Love page.

Two other invasive insects have also taken a huge toll on dry forests in Hawaii, impacting the leaves of native Naio and Wiliwili trees, thus severely impacting the photosynthesis needed for the trees’ survival: 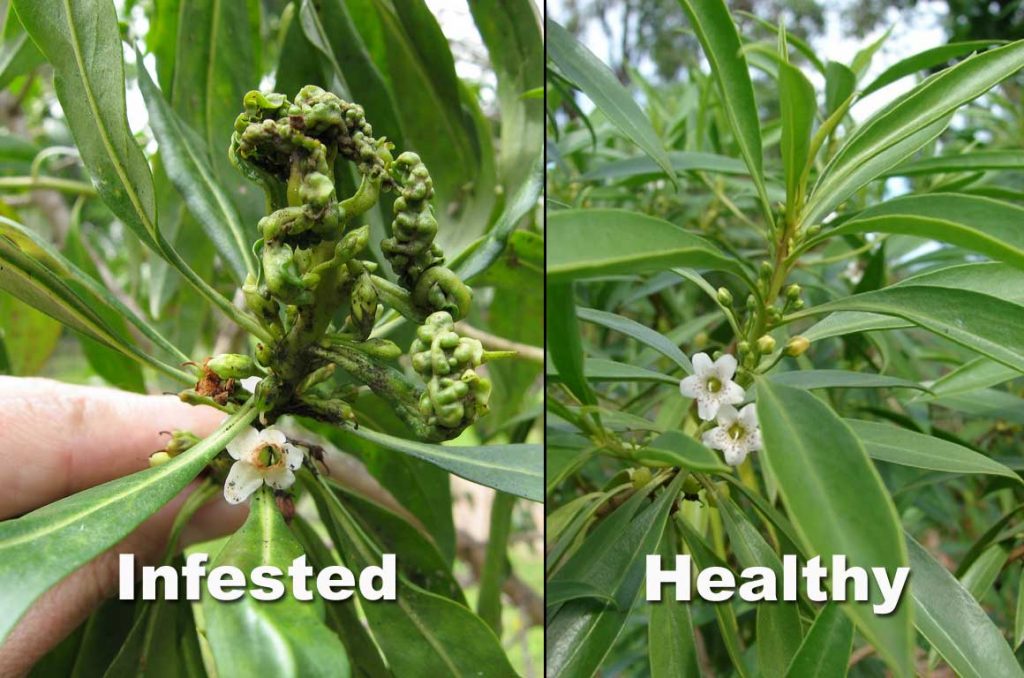 For more information on the these invasive insects and their impacts, please refer to the following:

Ungulates and Other Introduced Animals 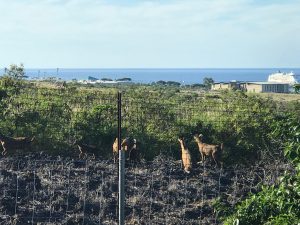 Ungulates (mammals with hoofs) have also severely impacted the dryland ecosystem landscape.  Prior to human arrival in the Hawaiian Islands, ungulates did not exist here.  As a result, native Hawaiian plants lack the common defenses to browsing and trampling that plants developed elsewhere (e.g. bitter taste, thorns), thus were highly grazed and trampled by domestic and feral ungulates.

This is why fencing is so important as a conservation strategy in Hawaii. Following are two papers to begin exploration of this threat:

Controlling Ungulate Populations In Native Ecosystems In Hawaii.  A Position Paper by the Hawaii Conservation Alliance that states, “Ungulates impede the progress of conservation and restoration of native Hawaiian ecosystems. Ungulate removal, in conjunction with other management actions, is necessary to ensure the success of ecosystem restoration and preservation of native Hawaiian ecosystems.”

Goats in Hawai’i Volcanoes National Park: A Story to be Remembered is a very thorough historical account by W. Edwin (Ed) Bonsey, a volunteer with the National Park Service, about the long journey to control goats in this National Park.

Introduced Animals In Hawaii’s Natural Areas
CHARLES P. STONE and STEPHEN J. ANDERSON, Hawaii Field Research Center, Hawaii Volcanoes National Park,
ABSTRACT: The Hawaiian islands provide superlative examples of biological evolution and are perhaps the best sites in the world for biological invasions. Introduced invertebrates such as the Argentine ant (Iridomyrmex humilis) and the western yellowjacket wasp (Paravespula pensvlvanica) reduce native insects and plant pollinators and may have been a factor in native bird declines. … Research on the long term effects of alien birds on native ecosystems is under way, but management currently is restricted to preservation of intact and large areas of native ecosystems. Black rats (Rattus rattus), small Indian mongooses (Herpestes auropunctatus). and feral cats (Felis catus) are thought to be especially important invaders of natural areas in Hawaii. … Ungulates have been the most prominent alien animals in Hawaii’s ecosystems since shortly after continental man introduced them in the 18th century. Successful control and even eradication of feral cattle (Bos taunis), feral sheep (Qvisaries), mouflon (Ovismusimon). feral goats (Capra hircus), and feral pigs (Sus scrofa) has been accomplished in many areas to date through systematic, long-term programs with salaried personnel. Methods and costs of some of these programs are presented.

There are numerous organizations dedicated to conservation and management of negative impacts to native ecosystems. Following are several of these organizations working to lessen the impact of invasive species in Hawai’i. Their websites provide many resources and additional links.